In a major mishap, a multi-storied building collapsed at Ghaura Chowki near here on Thursday while two more buildings located down below were also completely damaged and another building is endangered.

Cracks had appeared in the building a few days back and it crumbled like a house of cards this evening. However, no loss of life was reported as the building was vacated this afternoon.

The district administration had issued notice to evacuate the building two weeks back and the efforts to salvage the building failed as the foundation had reportedly weakened due to seepage of water from buildings located above.

“All eight families were evacuated this afternoon and are being rehabilitated and as such there was no loss of human life, another building has been endangered,” said Shimla Deputy Commissioner Aditya Negi, who was on the spot.

Panic gripped the people residing in the vicinity as a large number of huge buildings have come up in the fragile hill popularly known as “Kachhi Ghati”.

“We were hearing crackling sounds since last night and the residents started moving out and the building was totally vacated by today afternoon,” said Abhishek, who lives in the adjoining building, adding that the building was tilting since afternoon.

The police, administration and fire brigade was already on the spot when the mishap occurred and Urban Development Minister Suresh Bhardwaj, who is also the local MLA, also visited the spot.

The administration is ascertaining whether the building was legal with a building plan approved from Municipal Corporation and necessary action would be taken after the records are perused. 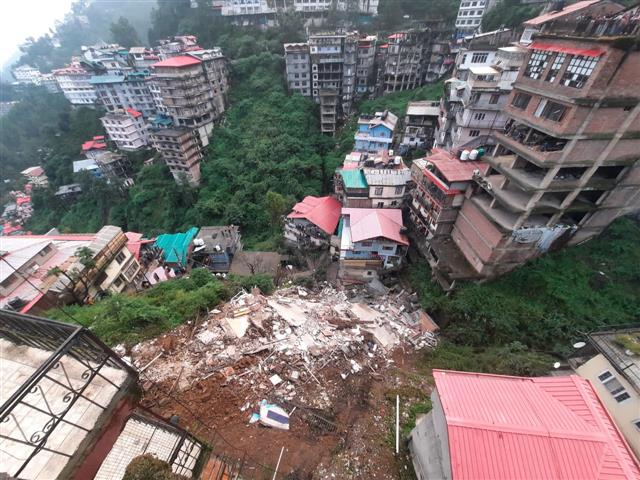